War of the Independents! 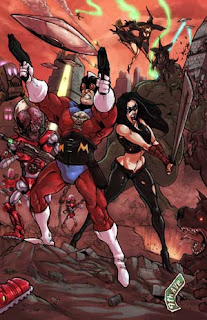 If you haven't heard, Arcana is publishing a 6 issue series entitled "War of the Independents", scripted by Scott Lobdell (Uncanny X-Men, Age of Apocolypse, Generation X) and illustrated by Dave Ryan & Richard Kane Ferguson. And amongst the list of entrants into the fray is none other than . . . Eve: Vampire Diva!

Ash and I are proud to have our sword wielding vampire diva included in this mega-event that will hopefully bring a much needed spotlight on the great indy hereos and creators out there.
This exciting event has recently been covered by comic book press sites such as comicbookresources.com. (http://www.comicbookresources.com/news/newsitem.cgi?id=9806)
More info can be found at Dave Ryan's myspace site: http://profile.myspace.com/index.cfm?fuseaction=user.viewprofile&friendid=22352963
As part of the hype, Arcana is releasing a pin-up book at the San Diego Comic-Con. Creators were encouraged to choose a team-up to have it included in the book.
Ash Jackson jumped at the opportunity to team up our Eve with an old-school great: Michael T. Gilbert's Mr. Monster!
I've included a low-res internet friendly shot, but I hope if you get the chance you'll pick up the pin-up book.
Progress on Eve's 4 issue series from Arcana later this year is moving along smoothly. The script for the last issue is just about done and Ash is beginning the art for issue #3.
In the meantime, Eve's page is up at Arcana's newly designed website: http://www.arcanacomics.com/comicdisplay.php?id=43
Be sure to check out all the other great titles like Gearhead, Koni Waves, Kade, American Wasteland, Philly and many many more.
Hopefully we will be able to release a publishing date for Eve shortly!

Frank
Posted by Send Comments to: at 12:03 PM No comments: