"Making of" feature at Comicmonsters.com

The fine folks at Comicmonsters.com have a feature up with Eve artist, Ash Jackson, and how he brings the pages to life.
Check it out here:
http://www.comicmonsters.com/section-article-235-The_making_of__Eve__Vampire_Diva_-_by__Ash_Jackson.html
Posted by Send Comments to: at 12:32 PM 3 comments: 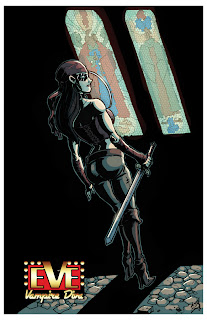 The nice folks over at ComicMonsters.com have done an interview with Eve: Vampire Diva writer, Frank LaPerch.
Check it out here:
http://www.comicmonsters.com/features-989-Frank_LaPerch_talks_Eve__Vampire_Diva.html
It gives some history on how Eve came to be published and what's in store for our fanged diva!
Also - a big thanks to all the fans who came out to see us at NYCC 09. It was a blast and our immortal diva even took time out of her busy schedule to stop by the Arcana booth! 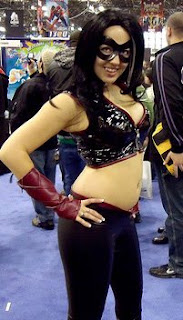 Posted by Send Comments to: at 2:57 PM No comments: 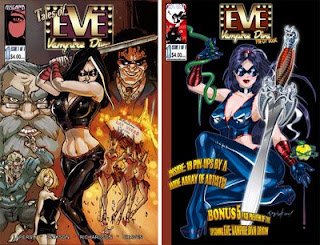 NYCC is less than a week away and we'll have two books available for the show!
The first is "Tales of Eve: Vampire Diva" which is a collection of 3 short stories, brought to you by three different artists: Ash Jackson, Andrew Richardson and Diego Chaves. It also has another masterpiece cover by Ash Jackson!

The second  is the 2009 Eve pin-up book.
These are brand news pin-ups of our immortal diva by over 15 different artists.
It also sports a stunning cover by Franchesco!

And there's also an exclusive sneak peek at the upcoming Arcana one shot special being released later this year: "Eve: Vampire Diva - Origin" That's right - see how it all began for the undead pop star!

The two pin-ups here are just a glimpse at some of the beautiful pieces of art in this special edition.

The first is by Koni Waves artist, Steve Sistilli (www.koniwaves.com). 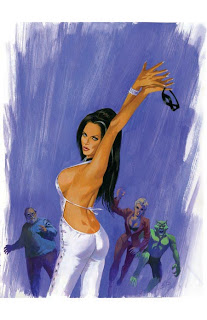 This second pin-up is by Portrait and Comics/Fantasy illustrator, Jay Fife (www.jayfife.com). 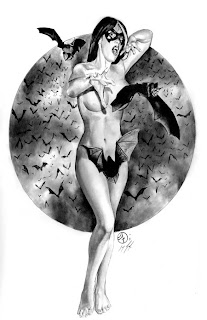 Ash and I will be at the Arcana booth (1803) all throughout the con. Our official signing times are the following:

Rumor also has it that Eve and her friend, Koni, might be taking time out of their supernaturally packed schedules to stop by the table for pictures.

We just finished the promo cards for the Eve: Origin special that we'll be handing out at Baltimore Comic-Con. (9/27 & 9/28 ) We may also do some posters of this one as well! Ash's art is as usual - unbelievably epic!

I'll be with our friends at Koni Waves in Artist Alley and have all 4 issues of the first Eve mini-series available. (Ash probably won't make Saturday, but may be there on Sunday)

I hope these images get you psyched for the upcoming Origin special. It's a darker story than the original mini, but its still got the same spunky vampire diva! 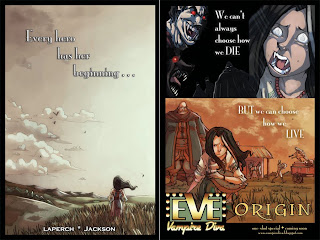 Posted by Send Comments to: at 9:12 AM No comments:


Just wanted to let you know that Arcana is putting out a 64 page full color horror anthology and it's in this month's previews. One of those stories is an all new 8 page adventure featuring Eve: Vampire Diva! It takes place right after the original mini-series.

The link below is a preview of one of the stories: "Baker's Dozen" by the creators of Koni Waves (Mark Poulton/Steve Sistilli/Dexter Weeks)

This is the ordering info - if you're interested, please tell your local comic shop!

Below is the front cover by Steve Sistilli and some art from the Eve story (Frank LaPerch/writer, Ash Jackson/Artist).

Posted by Send Comments to: at 7:19 AM No comments:

We had a blast last month meeting a lot of Eve fans at the New York Comic Con! Can't wait till next year! We also sold a bunch of Eve sets to new readers which is always a thrill!

I'll be there all three days and Ash will be there Saturday and Sunday. Also at the table will be our significant others, Patti and Katie-Lynne. Come by and say hello!

We'll have all 4 issues of Eve and some of the NYCC pin-ups books as well as some posters.

Ash also finished up a great original pin-up book for WW Philly which includes 7 pin-ups from other artists.

Here's one of Ash's:

and one by Cesar Gaspar, colored by Ash:

And here's a sneak peek at the snazzy 3 foot by 6 foot banner for the table:

Hope to see you in Philly!
Posted by Send Comments to: at 1:21 PM No comments:

He had this to say:
"Eve brings it all home in a solid good read."
and
"The art is as lively as ever and, dang, this is just a really good, fun book. Even if you're sick of the vampire genre, you will probably still enjoy this book."

You can check out the reviews here:

Thanks Matt for giving our fanged diva a chance!
Posted by Send Comments to: at 1:15 PM No comments: